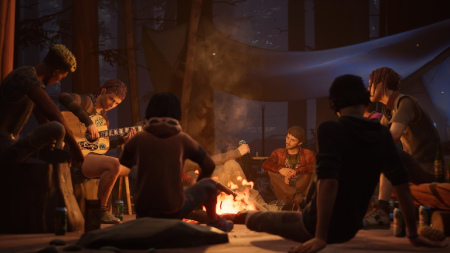 Feral Interactive is an independent English computer game publisher specializing in the processing of popular games to run them on MacOS and Linux. The addition of iOS to these platforms was marked by the release in November 2016 of the first iPad game - ROME: Total War. This was followed by the release of GRID Autosport for iPad and iPhone in November 2017. The company was founded in 1996. Headquartered in London, England.

Feral Interactive posted on Twitter that the development of Life is Strange 2 for MacOS and Linux was coming to an end. In the near future they will have more information about this.

- “This journey can forever bind Sean and Daniel ... or tear their brotherhood apart.”

Life Is Strange 2 is an episodic computer game with elements of adventure in the genre of interactive cinema, developed by the French company Dontnod Entertainment under the publishing house Square Enix. This game became the third in the Life Is Strange series and the second, developed by Dontnod Entertainment after the original. The first of five episodes was released on September 27, 2018 on Microsoft Windows, PlayStation 4 and Xbox One. And now this game will be available on MacOS and Linux thanks to Feral Interactive.