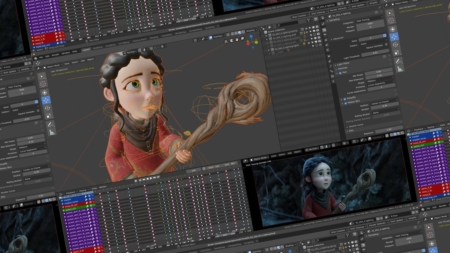 Not so long ago, Ubisoft and Epic Games began sponsoring the Blender project. Now NVIDIA is also joining the financing.

The chairman of the Blender Development Fund, Ton Rosendaal, mentioned on Twitter: they have been working with NVIDIA for many years and that they are«very happy to see that this is consolidated by the membership of the Development Fund».

NVIDIA Joins Patron Level Blender Development Foundation. This will allow two more developers to take up the development of the Blender core and support NVIDIA GPU technology for our users. Thank you NVIDIA for trusting our work!

The Blender project is developing at an incredible rate. It is used by many people and large companies. Blender is used in movie making and game development. It's pretty nice to see huge corporations like NVIDIA fund an open source project.

NVIDIA is now at the Patron level. This means that they promise at least € 120 thousand per year. They get the highest membership in the Blender Development Foundation after Epic Games for supporting Blender through the corporate membership system. According to the financing page, the Blender Fund now receives about € 82,471 per month. You can see information on financing the Blender project on this page.

If you want to try Blender, then you can download it from the official website or from Steam for free.