The Steam client for Linux has a feature that allows you to add your own custom Steam Play builds and other compatibility tools such as Proton-GE. A very useful feature, as the community can build on the work Valve has done to make Linux games on Steam Play even better.

Recently, another user assembly has appeared on the GitHub - Proton-i 4.13-3. This is a rather small build based on Wine-4.13 with patches and fixes from Proton 4.11-2.

In addition, there is Proton-4.14-GE-1. Includes some more advanced features and updates over standard Proton. Proton GE adds Wine Staging patches, Wine 4.14, a more modern DXVK from git repositories, D9VK does not need to be manually enabled, as well as the latest version of FAudio from git repositories, and much more.

There is also Boxtron, the Steam Play compatibility tool for launching DOS games through the Linux built-in DOSBox. There is also proton-tkg. It, too, includes a lot of settings.

How to use it?

After that, download the custom Proton release we need. To do this, go to the GitHub website, with the release of interest to us. For example, take Proton-4.14-GE-1. Download links are available under the release description: 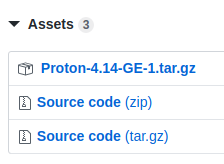 Then we extract the contents of the archive into the compatibilitytools.d directory. If the Steam client was launched at this time, then it will need to be restarted. Next, just go to the library in the Steam client, find the game that interests us and open its properties. In the window that appears, select the check box “Force the use of a specific Steam Play compatibility tool” (a line with the version of Proton will appear below) and select the downloaded Proton release:

After this small process, you can begin to launch and test the game.